Including Vatican Museums, Sistine Chapel and Saint Peter 's Basilica
Duration 3 Hours/Walking Tour
Tour suitable for people in their own wheelchair
Tour not available on Sundays or Religious Holidays
Skip the line tickets/No - Wait Access to the Vatican Museums

Please remember that the Sistine Chapel and St. Peter's Basilica are holy places, and attire must be appropriate for the visit. Both men and women are asked to wear clothing that covers at least the shoulders and knees.

This interesting tour is suited to those who like exploring one of world's most fascinating State. The tour follows the regular route in the Vatican Museums, which includes  Pio-Clementino Museum, with some of the best works of antiquity, here are the Belvedere Torso, which so influenced Michelangelo, and the Laocoon, a 1st -century AD piece found in 1506, depicting the Trojan priest and his two sons straggling with two snakes.

Even if Michelangelo had not painted his famous  ceiling the Sistine Chapel, would still be one of the Vatican Highlights. To paint the ceiling Michelangelo worked upside- down single- handedly for four years.

Inside Saint Peter's Basilica is the Pietà, Michelangelo's remarkable rendering of the Madonna and dead Christ, which he sculpted when only 25. Under the dome is the Baldacchino  by Gian Lorenzo Bernini. This huge bronze canopy  rises over the holiest part of the church, the legendary tomb of Saint Peter's. 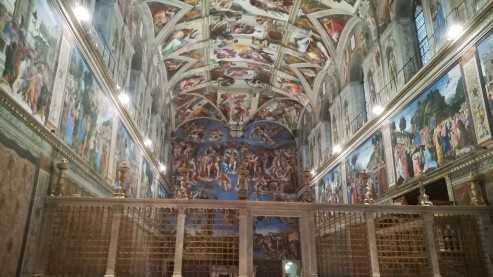