Including Etruscan Necropoli , Cerveteri Museum and the Medieval Village of Ceri
Duration 6 Hours/Driving Tour
Tour not available on Monday

Begin your tour with a relaxing drive through the Roman countryside to the small town of Cerveteri.

This town founded in the 9th century BC, called Caere, was a powerful member of the Etruscan League and one of the Mediterranean's most important commercial center. Cerveteri  is home to one of Italy's great Etruscan treasures,  the Necropoli della Banditaccia.

This ancient burial complex, now a Unesco World Heritage Site, is all that remains of the formidable Etruscan city that once stood here. The banditaccia,  12 hectare necropolis, is a veritable city of the dead, with streets, squares and terraces of tumuli (circular tombs cut into the earth and capped by turf). Some tombs, including the 6th century BC Tomba dei Rilievi, retain traces of painted reliefs, many of which illustrate endearingly domestic household items, as well as figures from the underworld.

The tour will end at the medieval village of Ceri, Borgo di Ceri, a picturesque hill town built high on a plateau of tufa rock. Via della Rocca, the only uphill street leading to  the village is particularly suggestive. 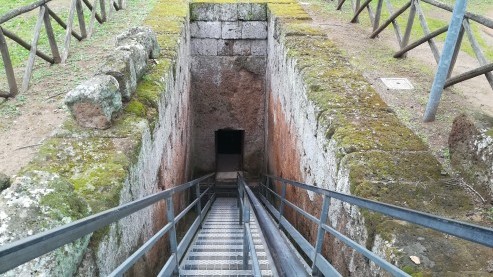