Including Vatican Museums, Raphael's Rooms, Sistine Chapel and Saint Peter 's Basilica
Duration 3 Hours/Walking Tour
Starting Time 7.30 am
Skip the line tickets/No -Wait Access to the Vatican Museums
Suitable for people in their own wheelchair
Tour not available on Sundays or Religious Holidays

Please remember that the Sistine Chapel and St. Peter's Basilica are holy places, and attire must be appropriate for the visit. Both men and women are asked to wear clothing that covers at least the shoulders and knees.

This early morning Vatican tour will offer you an unforgettable experience. Be among the first people in the Sistine Chapel, admire Michelangelo's ceiling and visit all of the most important sights of the Vatican.

Learn about Renaissance and Baroque art in the most relaxed and comfortable way  with your private tour guide. Having an early morning Vatican tour means you’ll enter the Museums before the general public. The early morning Vatican  tour includes the Gallery of Candelabras,  Maps Room, Tapestry Gallery, Raphael Rooms and Sala della Signatura, which  was probably where the pope's council met to sign official decrees. In the School of Athens fresco, representing the triumph of philosophical truth, Raphael portrays ancient characters with the features of contemporary heroes.

Even if Michelangelo had not painted his famous ceiling the Sistine Chapel, would still be one of the Vatican Highlights. To paint the ceiling Michelangelo worked upside- down single- handedly for four years.

Inside Saint Peter's Basilica is the Pietà, Michelangelo's remarkable rendering of the Madonna and dead Christ, which he sculpted when only 25. Under the dome is the Baldacchino  by Gian Lorenzo Bernini. This huge bronze canopy  rises over the holiest part of the church, the legendary tomb of Saint Peter's. 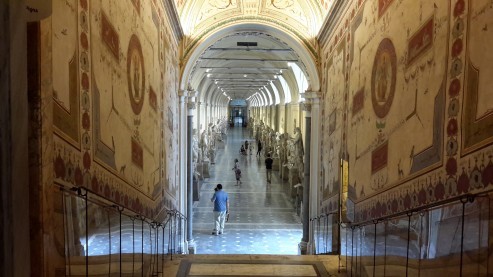