Let your imagination take you back to 2000 years ago, when Ancient Romans use to walk around the city with togas and sandals; follow them in the streets and see what they use do to in their free time.

The Coliseum, once the setting for gladiator combat, lion-feeding frenzies, and public entertainment whose cruelty was a noted characteristic of the Empire is today a must of the modern city;

The Circus Maximum was as a chariot racetrack and host of the Roman Games.

The Caracalla bath, the most impressive complex of the ancient city was used by 1600 bathers, the water hasn't been running for 1, 500 years but you can follow the path of the ancient bathers from the changing rooms to the calidarium, tepidarium, and frigidarium, then out to the exercise areas and libraries. The massive brick walls and remaining mosaics helps you imagine what a grand experience bathing in Rome would have been. 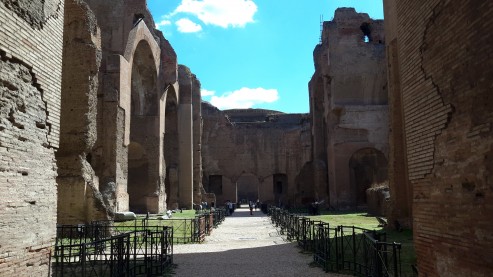