Including  Decumanus Maximus, Baths of Neptune, Roman Theatre, Roman Necropoli
Duration  4 Hours
Tour not available on Mondays
Car and driver can be arranged on request
It is also possible traveling by train.

This is one of my favorite tours. I consider it an excellent alternative to a long and stressful day trip to Pompeii as Ostia Antica, with its wonderful archaeological area, is unmatched. Walking through its ruins is an unforgettable journey into the past.

Just 26 km south of Rome, near the sea, lies the vast archaeological site of Ostia Antica. First a military,  then a commercial port, Ostia became a rich and flourishing city of strategic importance for the exchange of goods between Rome and the other provinces of the Empire. Our trip begins along the ancient Via Ostiense, flanked by the necropolis, the ancient inhabitants' burial place. From there, entering the Decumano Massimo, the main artery of the city, we will stroll along the ancient ruins as we talk about the daily life of the ancient inhabitants. Ostia Antica was a city full of comforts: numerous spas, temples, restaurants, bakeries, and laundries still in enough of a condition for you to imagine what the world of the Roman Empire was like. 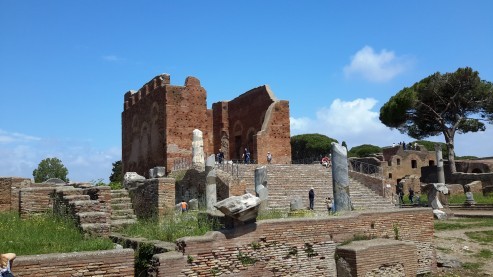