The Castelli Romani, or “Roman Castles”, lie just south of Rome and it is extremely picturesque, with towns perched on the edge of two volcanic lakes, Lago di Albano and Lago di Nemi.

Many of the towns are well-known for their own local delicacy, such as Genzano for its rustic country bread, Nemi for its wild strawberries, Ariccia for its porchetta and Frascati for its white wine.

Part of this trip will be dedicated in exploring Castel Gandolfo. In a splendid position overlooking Lake Albano, Castel Gandolfo is situated on the brink of a volcanic crater. The town was elected as one of “The most beautiful villages in Italy” (I borghi più belli d’Italia). Above all, the small town is famous for the Palazzo Pontificio where the Popes spent their summers since the 17th century.
In here you will taste the famous porchetta, a whole piglet filled with lots of fresh herbs and slow-roasted either in a wood oven or even outdoors on a spit,  bread and cheese and local wine.

The next stop will be at a small & family-run winery where you will taste a selection of three Frascati wines produced by the family. 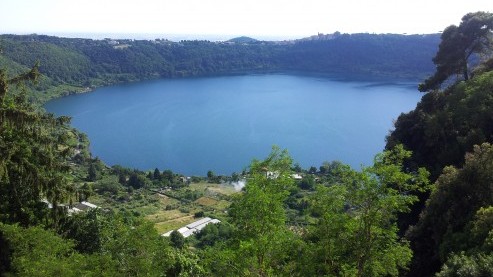